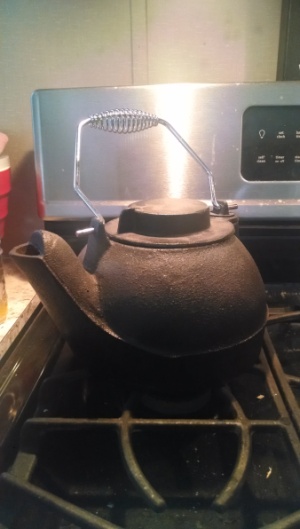 As I scrolled through my Facebook “on this day” feed, I couldn’t help but notice a little trend. It appears we have started a new family tradition of getting head colds after Christmas. We were all sick for New Years 2013-2014. We were sick right before New Years for 2014-2015. That was the year we had a big party with our neighbors and while the adults were across the street playing cards, the kids were at our house playing video games. The kids failed to notice that our BIG dog had to go out. Pappy took it upon himself to their attention by peeing on our Christmas tree. FYI, you don’t get the smell of dog pee out of an artificial Christmas tree. We barely stayed awake to ring in 2016 because again we were all sick.
I tried really hard to blame this year’s round of cooties on the family Christmas party we attended this year. The same Christmas party we had missed for 7 years. It would appear I was wrong. It happens. Maybe Santa is bringing us an immune boosting “get sick now so you won’t get it later” cootie present in our stockings.
Talking snot isn’t fun, so let’s roll back a few days and talk about what’s been happening on the farm…..before cooties.
My Mister {that’s my husband}, doesn’t get to be around much right now. We’re stuck in a transition period between city life and farm life and it’s all very boring and complicated and scary. There is a WHOLE LOTTA LEANIN’ ON JESUS right now. We managed to move down here without him taking a lot of time off so we could have him home a LOT for Christmas. We just had a two week spree of Daddy being home and it was glorious!
Even more awesome, he found a big bucket of Round ‘Tuits and tackled my big wish list. He even added a few extras, because he’s sweet like that. Coat racks were hung, Halloween decor was finally packed away, shelves were put up in the barn and I even have my very own craft space!
Let’s see if I can sum up how great this was without having this post get VERY long. We when decided to move out here and start homesteading there were a rather long list of “I’m not going unless this happens” followed by a long list of “I’m not going IF this happens”. He did his best to ensure all my demands, and they were demands, were met. Then we moved. Reality is a beast. Great plans are great, until reality shows up. It seemed every weekend that my Mr. was here, a little bit more of my demands were being compromised to make room for reality. I wasn’t taking it well. In the past two weeks, he finally had time to make good on his promises and roll some of those compromises back in my favor. *insert happy wife dance*
Things were moving along swimmingly until the cooties showed up. My week of putting away the holidays and getting back into the swing of things is down to 48 hours. Not because my Mr. will be home again, but because snow is coming. I need to have a clean house before the snow starts falling. 60 degree temps and no rain means a today has a lot of potential.
Maybe if I get all my chores done, I can come back and tell you about the toys I got for Christmas! #cardingpaddlesandalpacaOhMy!

Get Posts Delivered via E-mail!